The Who - Classic Records DAT Masters

(Some Hits, Some Misses and Some Defects...)

The Kids Are Alright / I Can't Explain 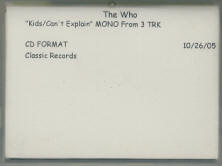 This is an odd combination of tracks: The Kids Are Alright, I Can't Explain, Much Too Much and The Good's Gone. This tape was apparently mastered directly from the Shel Talmy 3-track Multitracks. Each of these tracks sounds great, but as expected, "I Can't Explain" is missing the overdubbed cymbals (which were recorded directly onto the mono mix and added to the 2014 stereo remix). "The Good's Gone" is the unedited version. 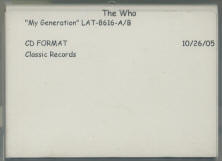 Mastering is closer in sound to original multitracks. Very detailed, but has less bass than other officially released versions. Some added bass would be a welcomed improvement.

Out In The Street   The Kids Are Alright 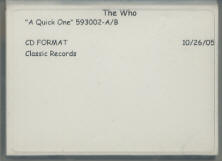 Never been a fan of the mono version of this album (the stereo version is so much better). This mastering is well-balanced and super clean. The mono guitar parts in "Run Run Run" pop out like no other version.

The Who Sell Out (Stereo)

This is a real good recording of the original mix. However, there's no "going back". Like the 1995 remixed/expanded Live At Leeds, you can't go back to something "less perfect" than the remix. In 1995, Andy Macpherson’s remix set a new standard. He was able to create an 8-Track multi-track from the original tape reels which comprised the 4-track multis. In doing so, he was able to reinvent "The Who Sell Out" to a new level. Like Live At Leeds, you cannot go backwards here. No matter what you do to the original version (based on the 4-track mix), it will never sound as good as the 1995 remix. On this particular tape, they seemed to like the feel of the mono version as there's a lot of bass in the recording. Nice job overall, but no comparison to the remixed version...

WAV Samples (Compare these to their mono counterparts below):

The Who Sell Out (Mono) 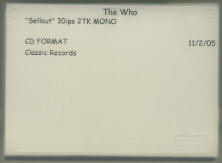 Excellent reproduction of the mono mixes. The original mono LP mixes were flawed by inconsistent mastering from track to track. When Classic Records introduced their mono mix LP in 2006, it was the first proper mono version of the album released. Subsequent CD versions sounded very good as well, but this version appears to have a slight edge over those. 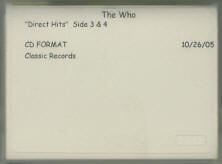 This appears to be "bonus tracks" intended for an extended My Generation and (???). Excellent reproduction of the following tracks: I Can't Explain, Bald Headed Woman, Anyway, Anyhow, Anywhere, Daddy Rolling Stone, Anytime You Want Me, Shout & Shimmy, Lubie (Come Back Home), Leaving Here, Motoring, Circles, I've Been Away, Under My Thumb. 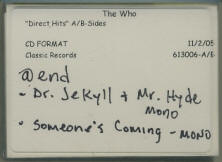 Never a fan of this album, but it is what it is. This version has (4) four <mono> bonus tracks: Magic Bus (4:24), Dr. Jekyll & Mr. Hyde, Someone's Coming and Heaven & Hell. What appears to be unique with these bonus tracks is "Magic Bus" as all of the other officially released versions of long studio version are in simulated stereo. "Dr. Jekyll & Mr. Hyde" is the common toned down second version. Overall a clean mastering. 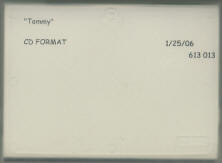 Excellent reproduction of the original mix of "Tommy" (perhaps the best digital version). However, there is no comparison between the original mix and Andy Macpherson’s 1996 remix which is far more dynamic and detailed. 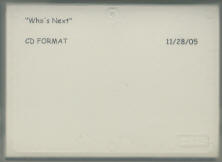 Excellent mastering. However, the best sounding original mix of "Who's Next" that I've heard to date is the 2015 version...

Bargain   My Wife   Behind Blue Eyes 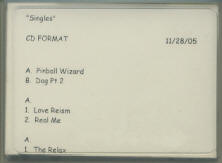 It appears that this tape was erased! (There's a label on the side of the case that says "Aborted") What was supposed to be a collection featuring: Pinball Wizard, Dogs Part 2, Love Reign O'er Me, The Relay, Waspman, Water, Let's See Action, I Don't Even Know Myself, The Seeker, Here For More, Naked Eye, stops abruptly shortly into "Pinball Wizard" (the first track) and there's nothing else on the tape! (Pinball Wizard sounded just fine for the brief moments it was playing!) 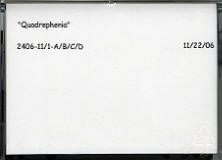 This is a real good mastering of the original mix. (Perhaps the best). However, like “Tommy”, it lacks the dynamics and detail of Andy Macpherson’s 1996 remix. I’ve read fan reviews pro and con regarding the remixes for 20+ years. Some of the original mixes were released with great sound quality and the remixes (or not) were a matter of preference. In several examples, the remixes transformed the album into something much greater than it originally was: The Who Sell Out, Live At Leeds, Tommy and Quadrophenia are examples of these. While not done in the 90’s (while the bulk of the remixes were released), the Richard Whittaker 2014 stereo remix of My Generation also falls into this category.

The Who By Numbers 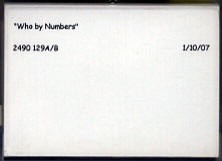 Great recording. The original mix CD released in the USA never sounded good and you would have to track down an original Germany Polydor CD if you wanted the original mix. They did a great job with this one. Enjoyed listening to it. 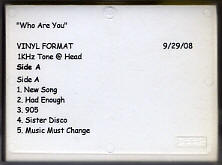 Seemed to be a defective recording. However, swapping DAT decks seemed to get a perfect recording from it...