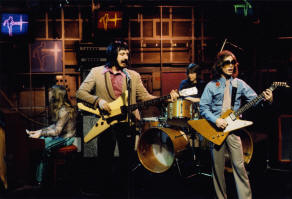 John started touring solo in 1975. The tour was in support of his <then> current LP, Mad Dog, but John played his other songs as well. While John and his fans had a lot of fun, he unfortunately lost a ton of money and put a damper on his future touring plans.

Though a series of events, John ended up doing a mini-tour with the New York based band, Rat Race Choir. The band mostly played known Who songs (including John's). They also performed a special concert for the NY City radio station, K-Rock and the only way one could get tickets was to donate blood. On November 8, 1987, John played a few songs at the blood bank (during the day) and then performed at The Bottom Line in New York City.

The tracks below are samples from the Bottom Line show, which was broadcast live on K-Rock:

In 1988, John created a newly formed John Entwistle Band to tour in support of The Rock. Unfortunately, the record company (which was supposed to release "The Rock"), was busted by the FBI and the album wasn't released - but John toured with it anyway ("The Rock" was finally released in 1996). The band was mostly the same lineup as recorded on the album, with the notable exception of Steve Luongo (formally of Rat Race Choir), replacing Zak Starkey on drums. Henry Small (formally of Prism) was the lead singer (both on "The Rock" and this tour).

In 1990, John and several other well-known musicians formed a <very> short-lived (two concerts) "super group" (comprised of John Entwistle, Keith Emerson, Simon Phillips, Joe Walsh, Jeff "Skunk" Baxter & Rick Livingstone), which was called "The Best". They played a great show in Yokohama, Japan on September 26, 1990. The Japan show was broadcast and eventually made its way to DVD and CD in 2011.

The tracks below are samples from The Best CD:

While John was in New York to play bass on a few songs for Roger Daltrey for his Carnegie Hall shows (see A Celebration), John met up at the China Club to play with some of his friends. This show was a preamble for the next version of the John Entwistle Band (formed late 1995) as it featured Godfrey Townsend on vocals and Steve Luongo on drums. Some of you may recognize Eddie Vedder on a few of the songs (Eddie was also a roadie for John's solo band in the late 1980's). 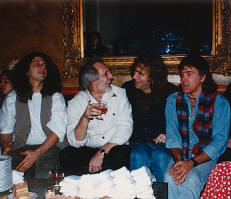 In 1996 John had a new band in place and began touring in January 21, by participating in a special event: A Party/Concert tribute to him and his fans at Tramps in New York City. Since The Rock was never released and countless fans had asked about it over the years, John released it privately and sold copies at his shows. The 1996 shows supported "The Rock" and featured mostly songs from John's solo and Who catalog. John loved to talk about Keith Moon. He deeply missed Keith and it seemed that part of his life never recovered. I had suggested that he take ownership of "Under A Raging Moon" and John loved the idea, making it a featured part of the band's set list. John loved his solo band. At times he claimed he "would much rather play with them then go out with The Who again" (although coincidentally he did). 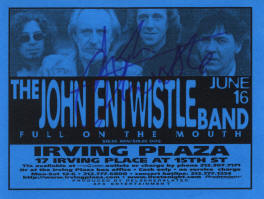 In 1998 the band had recorded the Van Pires album and unfortunately, the record company refused to release it until 2000. However, the band refreshed their set list and started working some of the new songs into their shows (despite the record company).

The tracks below are samples from The House Of Blues, Los Angeles, CA - July 28, 1998. This show was broadcast on the Internet (which was very ambitious at the time due to broadband limitations and technical issues):

Between all of this and beyond, John toured with Ringo Starr and his All Starrs, showed up occasionally to guest star at someone else's show, as well as toured extensively with his solo band through 2001...

Rest in peace John, you are missed by all of your loyal fans!